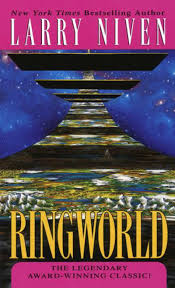 I actually read this title a little while ago but I’m refreshing my memory for the blog because I feel it bears being written about. For starters, I really liked the story. The overarching plot is reasonably compelling. Unfortunately it’s marred by Larry Niven’s blistering disregard for women. This was published in 1970, and reading novels from a particular era, I think you have to steel yourself against some degree of oblivious, but belligerent, misogyny. That said, I’ve absolutely read other authors who allow the influence of their own era to exist within the book without it being completely awful for readers, who, 30+ years later are starting to get the  hang of this whole “women are actually people” thing and get queasy thinking about how recent a development that is. As I’m writing this I’m halfway through Ray Bradbury’s Something Wicked This Way Comes and the female characters in that serve mainly as either set dressing or plot devices, but Bradbury doesn’t seem to have an active hate/fear relationship with his women characters. Niven, on the other hand, sees women as pretty vessels. The female characters in Ringworld (all two of them!) could be convincingly replaced by aesthetically pleasing Tupperware.

It’s a shame because I liked the story so much. I just learned that there’s a colloquial term for this type of story: “Big Dumb Object” or “BDO” for short. In BDO stories the entire premise is based on the existence of this one big object, whether it’s a threat to humanity, a giant physical anomaly that later proves to be the ticket to humanity’s continued existence, or just a weird unexplored chunk of space rock. Gamers, think the Traveler from Destiny. In the case of Ringworld the titular object is all three of these thing, which is why a team of explorers are sent to…well, explore it.

Huge unexplored space objects are my fetish, so I was quite enthralled with Niven’s descriptions of the Ringworld itself. The author’s descriptions of alien worlds and made-up future technology are sometimes a bit hard to follow, but having a picture in your head is more important than whether or not the picture is accurate. The story’s fairly large in scope, with the huge distances taking years and years to travel, even with fantasy advances in propulsion technology.

The main character, Louis Wu, is honestly just some old rich guy who doesn’t seem to have much else going on. Accompanying him on the expedition is Teela, who we first meet when Louis ends up sleeping with her at his birthday party. Despite an age gap of something like 40 years she falls haplessly in love with him because it’s the future and they have anti-aging technology and people live way longer and because Niven is extremely transparent in the way he projects his own fantasies into his writing. And pretty much the only reason Teela joins the expedition is because she can’t bear to leave Louis and also because Louis can’t bear to go on this multiple-year space journey without someone in which to holster his dick. The other two characters are of different alien species – one of which has sentient males and non-sentient females. I don’t think I really need to say anything more.

The one other female appears toward the end of the novel. She’s a crew member from a marooned space ship. Hang on, did I say crew member? I meant ship’s prostitute. Okay. I am totally supportive of sex work as a legitimate way to earn a decent living, and, okay, this alien is portrayed as mind-blowingly good at her job, but it would be so nice to meet a female character who is in the novel for reasons other than “has a vagina.” I can’t say for sure, but I’m going to guess that a progressive portrayal of sex workers was not at the forefront of the author’s mind when he wrote the character.

My verdict? Buy the book. Buy it USED. Read it, enjoy it, throw it against a wall. Pass it along to your friends.