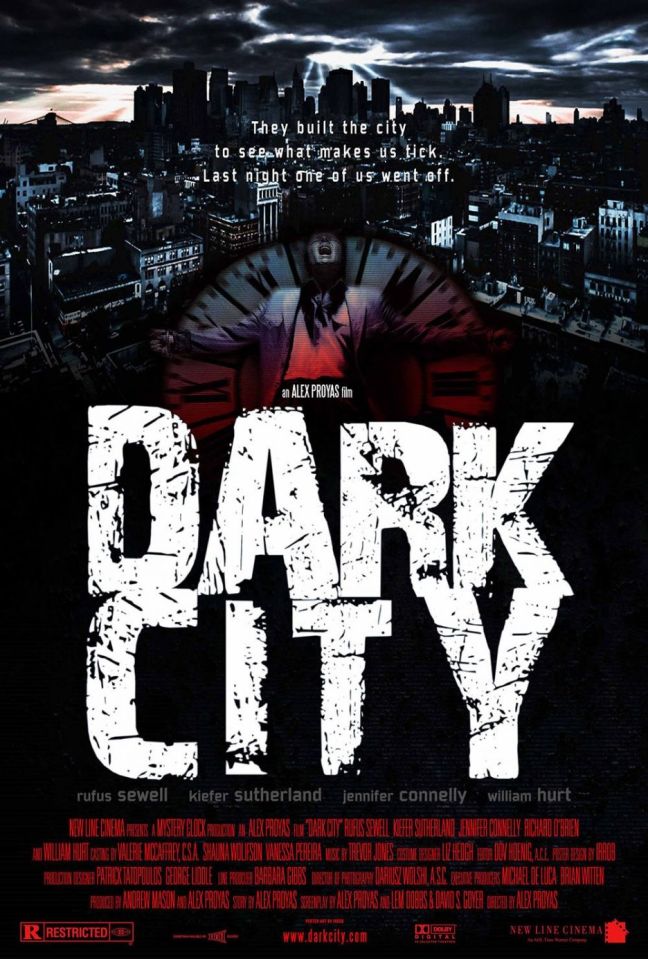 What we have here is an extremely flawed movie that in my humble opinion still manages to be somehow charming.

I have to point out right away that there are a lot of parallels between Dark City and the Sturgatsky brothers’ The Doomed City — enough that I’d balk at chalking it up to mere coincidence. I would not be surprised to learn that someone on the writing team for this movie was a big fan of the book.

Dark City follows protagonist John Murdoch (Rufus Sewell) as he wakes up in a bathtub in the eponymous city with no recollection of who he is or where he’s been. In trying to figure out just what’s going on, John finds himself pitted against a city whose inhabitants who seem to change occupations and identities at intervals. No one can remember the last time they saw the sun, and no one can seem to remember a route out of the city.

The biggest issue with this movie is its complete and utter lack of subtlety. Where The Doomed City meanders for well over 400 pages without ever revealing the true nature of the city, Dark City opens with two minutes of expositional narration in which everything is handed to the viewer on a silver platter. The city is an experiment devised by a dying, but technologically far superior race of aliens dubbed “The Strangers” who have come to Earth in the hopes of discovering the secrets of the human soul, and somehow using this information to reinvigorate their society.

That could have been an interesting reveal if it were made at the film’s climax. Instead, we the viewers yawn along as Sewell’s character struggles to grasp the facts that we already know.

The design of the aliens, too, really drops the ball. Seriously, what do you picture when someone says “millenia-old race of technologically superior aliens”?

Did the production company have a bunch of outfits left over from Blade: Trinity?

Oh, it’s true that the “actual” aliens are more like parasitic energy-based worms that dwell in the brains of their human hosts. They’re just driving human meat suits in order to “blend in.” But… why exactly do they have to do this? Did they have other bodies they possessed before they discovered Earth? What happened to those?

Not once in the film, during a confrontation with a city inhabitant, do the Strangers even attempt subtlety. They’re a roving band of mobster Nosferatus, threatening their victims with knives. Luckily, they also have the power to erase the memories of all the humans they encounter, not to mention bending reality to their will… so the point seems moot.

The city itself exists in an indiscernible climate, and apparently simultaneously in several different time periods — the clothing, interiors, and building design range from Victorian to late eighties’ imaginings of a near-future. The aesthetic of the whole film feels dated, but at the same time very cool — not quite on par with the aesthetics of, say, 2001: a Space Odyssey, but perhaps a poor-man’s version of that.

The performances are overall decent, despite the over-the-top of the aliens, and the pacing of the movie would be excellent were it not for the fact that it spills all of its secrets right from the get-go.

If you read The Doomed City, though, I do recommend this one — if only to get a feel for what the American fan version is like.

One thought on “Dark City”