I can’t decide if Japanese artist Azuma Makoto loves flowers or hates them. His is a practice that seems at times bent on putting gorgeous plants through the most hellish of trials and punishments, while at the same time elevating something you can technically find in your backyard to the status of high art sculpture. It’s sort of like Hannibal for florists.

I was first introduced to Makoto’s work when I came across an image of his frozen flowers. In an exhibition held in Japan in the winter of 2014, Makoto froze a number of large, lush flower arrangements in cartoonish crystal-clear blocks of solid ice. Think the block of ice that Steve Rogers gets caught in for 70 years. The sort of thing that would probably never happen by accident in real life. I don’t know how the artist did it, but there must have been some scientific consultation going on for him to get the arrangements to look just so, like they were blowing in an invisible breeze, while suspended in effective cryostasis.

I think my favourite part of this piece is the backdrop that Makoto chose. A barren warehouse that seems in direct contrast to the liveliness of the flowers. The wet concrete floor, stainless steel apparatus and chains make me think of a slaughterhouse or industrial factory. Not really a place for flowers. That tired old word juxtaposition is almost as alive as the plants seem to be in this piece. I could talk about the slow death that the plants experienced as the ice slowly thawed leaving them wet and wilted on the floor, but there aren’t any photos of the aftermath – not that I can find, anyway. That was behind the scenes, not meant for the viewing public.

So Makoto used ice one time to suspend his plants but in other cases it’s a recurring cube enclosure that looks like a cross between torture device and display case. A plant, sometimes a Bonsai tree, is held in place by four metal cables, leading to the corners of a small metal box, just a frame, with open sides. It’s an innovative vase, but provides the plant no protection or access to necessary nutrients. The plant becomes a beautiful object for a very limited period of time. Taking this further, Makoto sent flowers into space. Well, not technically into space, but into the upper levels of the earth’s atmosphere, about as close to space as you can get without being in the vacuum. 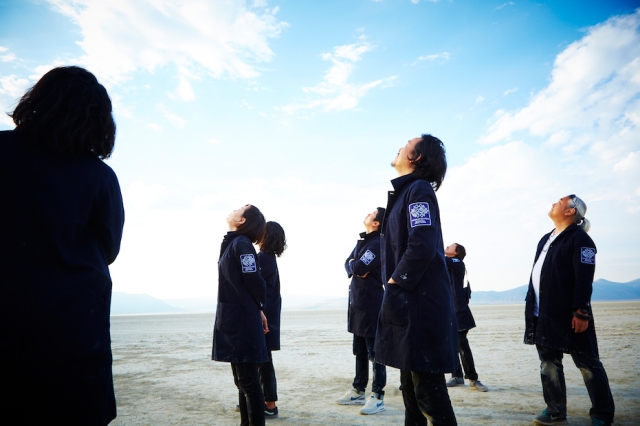 Why worry about the plants, suspended as they are in their metal cubes, days already numbered? I imagine they looked lovely for a few hours floating peacefully in the stratosphere, until they began to fall and wither. I’m not sure what the air and temperatures up there would do to a plant – I don’t think Azuma Makoto did, either. Launched out of Black Rock, Nevada, earlier this summer, the project isn’t the least Burning-Man-esque artwork I can think of, yet there’s something more focused and serene about it. The plants become Exobotanica, the artist’s website explains, they become extraterrestrial beings, freed from the earth. Perhaps this is a glimpse into Makoto’s true feelings about the plants – perhaps they are more, or can offer more than what we see them as. I wrote about Makoto’s studio in an upcoming post on Artist Run Website – his atelier, as many websites call it, because “studio” seems almost crass for the delicacy of the work that is being done here – and it, alone, is a work of performance art. Look at Makoto’s Exobotanica assistants, in uniforms with special patches on them. A team of scientists preparing for the future of art. I want to read that story.