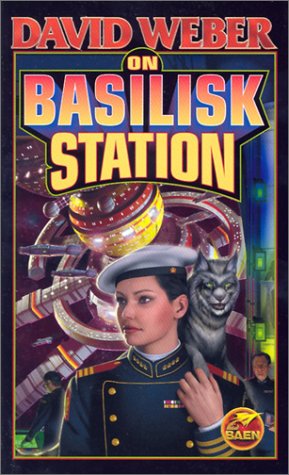 A few days ago I thought I was going to start this review by saying that David Weber’s On Basilisk Station, the first novel in the Honor Harrington series, attempted to be feminist but almost missed the mark. After having finished it, I can say it really hits its stride in the latter half. Considering that the last few novels I’ve read have been Horus Heresy volumes, it was wonderfully refreshing just to read something that focused on a female lead character. And even more refreshing to note that Honor Harrington is not treated as an anomaly in her universe, but rather that Weber’s Navy seems to have a fairly even distribution of men and women among all ranks and positions. Women in this novel are portrayed as capable, intelligent tacticians, scheming politicians, corrupt billionaires – and each is just as sincerely written and believable as any male character in a similar position.

While the story itself is tight and relatively small in scope – small given that the main conflict involves a space station, wormhole travel and interplanetary espionage – the writing itself drags very occasionally. This is usually when Weber gets caught up in explaining the technological aspects of ships and weapons or the history and process of various political systems. It’s clear that the author genuinely enjoys his world-building, and it’s not that I don’t appreciate this – I can think of a lot more stories where a bit more world-building could have improved things. Weber’s bouts of exposition sometimes go on for four or five pages, eventually reading like someone rambling nervously at a bar, knowing their target is going to walk away as soon as they stop talking.

Those of you expecting a tale of swashbuckling high-space-seas adventure won’t be disappointed – though you should be warned that things take a turn for the #dark towards the end of the novel when the stakes get higher and the body count rises. I’ve never been particularly put off by blood and guts but the way the gore is treated here (serious, with odd dignity given the number of over-the-top violent deaths and their slightly-too-loving descriptions) might be a little incongruous for summer reading. Honestly though, my biggest complaint about this book pertains only to the specific edition that I bought, which features a conventionally beautiful, long-haired Honor Harrington on its cover despite numerous descriptions to the exact contrary within. I digress: the book was engaging almost all the way through, with likable characters and meaningful losses, and I will definitely buy the next installment of the series.